"Secret Lives of the Underground Railroad in New York City"


Don Papson and Tom Calarco have opened for us a treasure trove, a first-hand, first-person, first-rate exploration of the Underground Railroad in operation.


"Secret Lives of the Underground Railroad in New York City" brings us deep into the inner workings of this grassroots resistance movement devoted to helping blacks free themselves from slavery .  And it isn't just a New York City story, because the authors track the freedom routes up the Champlain Line toward Montreal, out along the Erie Canal and Mohawk River toward Niagara, and more.


Papson, founding president and curator for the North Star Underground Railroad Museum, in Ausable Chasm, N.Y.,  trained his research south toward New York City when he learned about the never-before-published Record of Fugitives, unknown to the public for more than 150 years. His decision paid off.  He and two volunteers transliterated the handwritten journals covering the years 1855 and 1856, and the book draws heavily on scraps of escape profiles like this one:


"April 30.  John Williams, and Mary, his wife, from Haven Manor, 13 miles from Elkton, Md. master's name John Peach.  Ran away last fall, but were caught between Newcastle & Wilmington, taken back, & whipped.  Peach said if they ran away again, "he would have 'em if he had to go to hell for 'em." He will only, however, have to go (to) Canada.  It is not to be-sure so far, but the difficulties would hardly be greater, as in the other place, a slave catcher would be sure of aid & sympathy. 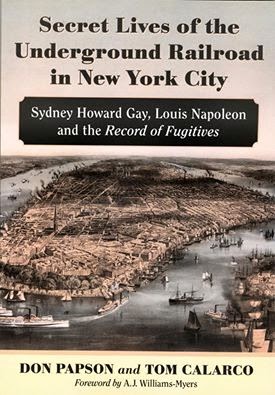 "They left on the night of the 10th & reached Wilmington before morning, & were received by Thos. Garrett.  Forwarded to Still, who sent them here.  Sent on to Syracuse.  $8.50"


Louis Napoleon, an illiterate black man, born into slavery in NYC, and Sydney Howard Gay, editor of The Standard, a major abolitionist newspaper and later of the New York Tribune, worked as a team to find escapees a safe haven in New York City, and then send them on to Underground Railroad agents in Albany, Troy, Syracuse and Rochester.  For two years, these operations were all recorded in careful detail by Gay, including the names of the agents, the route people traveled, and the amount of money spent on the escape.  (Garrett and Still mentioned in the excerpt above were leading station master agents.)


That daily reality could be harrowing, with slave catchers, bounty hunters, roaming the streets of the city, where big business and many citizens were pro-slavery, and whose mayor and police were not sympathetic to the freedom campaign.  The Underground Railroad operatives and leading abolitionists were harassed, threatened and driven from meeting halls.  Some of their houses were burned.


Many escapees came to New York City by boat from Maryland, Virginia and further south, hiding aboard with and without sympathetic captains to help them.  Some came as slaves and jumped ship to gain their freedom in New York.   Louis Napoleon, who has been rescued from total obscurity by this book, famously went to court to free some of these individuals, and then hired coaches to drive them north.


Gay complained to some of his partners in the Underground Railroad network that  the Philadelphia station's practice of sending people to NYC in the early morning hours meant that Napoleon was constantly getting out of bed  to meet 3 a.m. ferry boats crossing the Hudson from New Jersey.


Providing valuable context for these dramatic personal tales, Papson and Calarco also track the equally dramatic ups and downs of the leading abolitionist organizations of the time, and the power struggles between William Lloyd Garrison in Boston, Frederick Douglass in Rochester, Lewis Tappan in New York City, and others.  They fought over money, over whether to campaign for women's suffrage, whether to participate in politics, and over strategic direction.   They all agreed, however, that the fight for freedom was a moral imperative.


Given the chronic financial troubles of the anti-slavery societies and their newspapers, it is amazing they were able to help the freedom-seekers at all.  They were constantly appealing for funds, and sponsored fund-raising fairs, ran pleading ads in newspapers, and cut their staffs and salaries to the edge of supportability.  Still, Gay and Napoleon kept up their station agent work into the Civil War, as fugitives kept on coming.


Gay left the Standard in 1858, unable to support his family and worn out by the constant struggle.  Later that year, he joined Horace Greeley's New York Tribune, an anti-slavery paper, and by 1862 was managing editor.   "Secret Lives" recounts the harrowing story of the New York City draft riots in 1863, when angry mobs murdered hundreds of blacks -- men, woman and children -- and torched many buildings.


The Tribune building was a target, because of its pro-war stance, and Gay found himself not only writing editorials supporting Lincoln and the draft, but also rushed  to "the Brooklyn Navy Yard and came back with bombshells and hand grenades...A howitzer was positioned at one of the upstairs windows, and there were huge piles of hand grenades stacked at other windows.  Henry Ward Beecher sent over his Sharps revolving rifle, and a long trough was put in place so bombshells could be slid into the middle of the street away from the building.  Gay later told his wife and children 'if we had used them, the mob and the office and everybody in it would have been blown to Hell'. "


Review by Peter Slocum, a volunteer at the North Star Underground Railroad Museum.